The Bunny Bunch was established in 1984 by Caroline Charland to help rabbits in need. We are a non profit, no kill rescue and education organization run entirely by volunteers. Over the years we have rescued thousands of rabbits, mostly from high kill shelters.

Most of the rabbits we rescue come from city and county shelters.  These rabbits would have otherwise been euthanized. Unfortunately, rabbits are taken to these shelters every day, mostly because people have bought them from a pet shop, breeder or swap meet without learning about their care or knowing what to expect. They are often bought for young children who cannot care for them.  They are left in cages, hutches, or outside with no protection from predators.

It is our goal to place Bunny Bunch rabbits into loving homes where they will spend the rest of their life in a happy, healthy, environment. We do this by helping people make the right choice about adopting a rabbit, by educating them about rabbits and their care, and what to expect when you have a rabbit living in your home as part of the family.  We also stay up to date with the latest in health care for rabbits and work with many veterinarians across the United States and even in other countries. In December 2007 we opened our first adoption and education center in Montclair, California called the Burrow.

The Burrow is a safe haven for rabbits to live until they find their forever home. We always have lots of rabbits, chinchillas, and guinea pigs waiting for homes. We have a classroom where we hold seminars and workshops for the public, teaching them all about rabbit care. We also offer programs to teach shelters, vet techs, and even veterinarians about rabbit care and health.

We hope that one day because of our work and the work of others that rabbits won’t be sold at swap meets, feed stores, pet shops, and street corners. And that they won’t be used for testing products or used in experiments or bred for food. We hope that they will be recognized as the wonderfully delightful creature they really are. Our entire organization runs on donations, grants, and profits from our store.

At six years old I wanted to help animals in need so I raised money while living in England for the R.S.P.C.A. (Royal Society for Prevention of Cruelty of Animals). I did this by putting on concerts in our back garden, selling baked goods, dog walking, and carol-singing with other children in the area.

Once I moved to America I volunteered with cat rescue groups, helping them with events and fundraising. Realizing quickly how bad pet overpopulation was, I really became motivated to change that.

As far as rescuing rabbits it all started when I came upon a rabbit in a pet shop. He was sitting in a little wire cage full of poop, with an empty food and water bowl. The cage was dirty and he had no space to run around.

I asked someone who worked there to please give him some food and water. I waited around for about twenty minutes and they did nothing. I went home and told my husband about this poor rabbit that needed a home. We got straight in the car to go back to get him. We named him Benjamin Bunny.

Having cats all my life I knew nothing about rabbits. I tried to find some books, but they’re really wasn’t any good information available. The books that I read told me to put a rabbit in a cage or a hutch outside. I was living in Southern California and I just couldn’t believe that a rabbit would live well outside in a hutch, especially when it got hot. So we made him a home in our apartment. To my amazement, he started to use our cat’s litter box. I thought this was super! He could now live loose in our apartment just like our cat. The cat and rabbit, after being introduced properly, got along fine. In fact, the rabbit was the boss.

Then, I came home from work one day to find the phone cords chewed through, the wallpaper shredded off the bottom of the walls and the carpet pulled up. So we sectioned off the kitchen with a baby gate, seeing that there was no wallpaper in there, and the floor was wood. We unplugged the electric cords he could reach and made sure the phone cord was out of sight.

It came to my attention that he may be lonely while we were at work, so I set out to find him a friend. I didn’t want to buy another rabbit from a pet shop as I realized that was just helping the pet shop to have a never-ending stream of rabbits living in bad conditions, as well as putting money in their pockets. Just by chance shortly thereafter, I saw a sign that said Free Rabbit while I was driving home from work one day. The people said they had bought the rabbit for their child who was no longer interested in it. They put him in a box and handed him to me.

I kept my fingers crossed that he was a boy as we didn’t want any baby rabbits. Once I got home I checked, and yes, he was a boy. We named him Ramsey Rabbit.

I set him up in the bathroom for the night so I could put the buns together on the weekend. Little did I know that rabbits couldn’t just be put together. A fight broke out so I had to separate them.

I knew that tom cats liked to fight and that neutering helped calm them down so they could get along. I called my cat vet and asked if he could neuter my rabbits. As luck would have it he had neutered rabbits before, so I set up an appointment to have it done. Once neutered I put them together on the couch with me so they could get to know each other for a few nights in a row. From then on they became friends and both lived to be twelve years old.

The word got out that I had a pair of rabbits. Little by little rabbits that were no longer wanted or rabbits people had found were brought to me. It wasn’t long before I had a house full of rabbits! Seeing that there were a lot of rescue groups helping cats and dogs I decided to start a group just to help rabbits. Not only did I want to find homes for rabbits, I wanted to help rabbits have a better life once they were in a home.

I couldn’t stand the thought of so many people putting rabbits in cages and hutches. You would never put a cat or a dog in a cage. Why would you put a rabbit in one? Now that my rabbits used a litter box and lived indoors in a rabbit-proof area I wanted others to know how to do that too. After all, with the rabbits living indoors you could spend much more time with them and you realized what wonderful creatures they really are.

A big part of what we do at Bunny Bunch is education about the proper care of rabbits. We hold classes at both of our adoption centers with hands-on information. We also hold off-site events throughout the year to educate the public. We go to city and county shelters to show them how to set up living quarters, teach them about rabbits diet, plus set up spay/neuter programs. Also we work with exotic vets, and up and coming vets, to teach them about rabbit care and health. We have education booths at Pet Expos, Adoption Events, and City Events all throughout Southern California, and sometimes Northern California.

If you love animals and would like to make a difference please go to our Volunteer page. 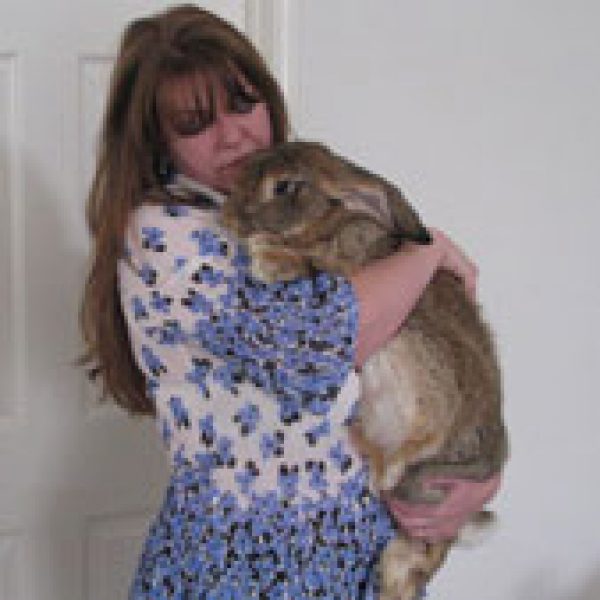 A number of different rabbits live with me in my home.  I take home the sick and injured rabbits to care for them while they recover until they are well enough to be adopted.  Some tend to stay with me due to ongoing special or medical needs. I love them all. 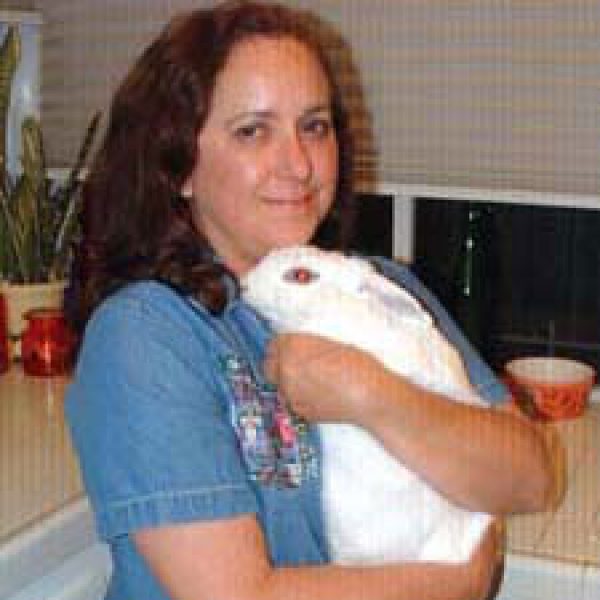 Before I joined The Bunny Bunch I knew absolutely nothing about rabbits. I was working with dog and cat rescues at a local shelter and didn’t even know there were rabbits there! My perception was the same as a lot of other “never had a bunny” people; I thought rabbits lived happily in a hutch eating carrots. Caroline Charland found me at the shelter and introduced me to the wonderful world of companion rabbits. Through The Bunny Bunch I learned about housing, diet, health, grooming, all about the amazing great big personalities housed in bunny fur. I foster failed my way through several rabbits and became a bunny champion! These wonderful souls have shown me patience, love, the ability to adapt and made me laugh in the toughest times. I hope to always have a bunny in my life. I, like many of my fellow volunteers, am a ‘foster fail’. More times than not I have adopted my fosters buns. I tend to take ones that have little chance of being adopted (especially biters). I am pictured here with Percy who is now a love-bug but was voted most bitey-ist rabbit by our volunteers! Flora called me a few years ago asking if she could do her internship with Bunny Bunch for social media. It was perfect timing as we were not able to keep up with our social media. Flora loved rabbits which is why she applied with us. She hoped to have a rabbit of her own some day.

Flora’s internship is over, but she stayed on as a volunteer and is the head of our social media now. She also adopted her rabbit Mika from us. Thank you for all your hard work Flora. We are lucky to have you.